Share a memory
Obituary & Services
Tribute Wall
Read more about the life story of Luther and share your memory.

LUTHER LARRY was born in Chicago, Illinois, February 24, 1958, from his late father Charles Larry Sr., and mother Hallie Owens. He was the sixth child born to this union. Luther professed a hope in Christ at an early age and began actively working in the church. As a young man he attended Philadelphia Church of God in Christ. Then, fellowshipped at Evangelistic Crusaders Church God in Christ where he accepted his deaconship. He also spent many loving years as a member of Dayspring Ministries Church of God in Christ. He later transferred his membership to Lighthouse Church of All Nations where he served on the security detail.

As a young child he enjoyed playing sports, singing in the choir, listening to music, and writing songs. Brother Larry attended Farragut High School and studied at Olive Harvey Community College in Chicago, Illinois. Brother Larry was employed by Chicago Public Schools and the Jesse White Tumbling Team/Foundation, where he worked as a security officer. He was also employed by the Department of Human Services’ Bureau of Blind Service, where he worked as a driver. On September 7, 1989, he married the love of his life, Sheila Henderson Ratcliff. To this union, they raised three wonderful boys, Fred (deceased), Lance, and Ricco Ratcliff. Brother Luther valued responsibility, in which he provided guidance for his children who are now respectful, responsible, and encouraging husbands and fathers.

In his personal relationships, Brother Larry was faithful to his wife, Sheila, of over 32 years, his children, grandchildren, and his friends. You could always count on him and if he made a commitment, he kept it. In fact, when it came to working on projects, he would do it meticulously and would not stop until completion. He was dependable; someone you would want on your team. There are lots of personal qualities that characterized Brother Luther. Furthermore, some of which were so ingrained in who he was that you could not think of him not exhibiting them (honesty, integrity, generosity). Brother Luther always enjoyed a good joke and would also make those around him laugh before you left his presence.

He was a man of deep spirituality who loved the Lord he served and who has left a legacy in the lives of those who knew him — that will endure for many years to come. On January 8, 2023, Brother Luther Larry was called from his earthly home to be with our Heavenly Father. Brother Luther loved God, loved life, loved people, and loved giving others a good laugh. Brother Luther was preceded in death by his parents, Charles Larry Sr. and Hallie Owens; brothers Lee Otis Owens and Willie (Bernice) Owens; sisters Gladys (Clarence) Goodlow and Emmaleane Larry; and one son Fred L. Ratcliff Jr. He leaves to cherish his memory, his wife Shelia Larry; sons Lance (Tanisha) Ratcliff and Ricco (Ashley) Ratcliff; sisters Sandra Vessels, Corrine Ireland and Carleane Larry; brothers Charles (Denise) Larry Jr. and Eddie Larry; Aunts Linnnie Dixon and Catherine Owens; Godmother Idella Henderson, Godbrother Clifton Henderson, Godsister Regina Perry; Five grandchildren (expecting two more), one great- grandson; as well as numerous nieces, nephews, cousins, Godchildren and many loved ones and friends. He was loved by so many.

To send flowers to the family or plant a tree in memory of Luther Larry, please visit our floral store. 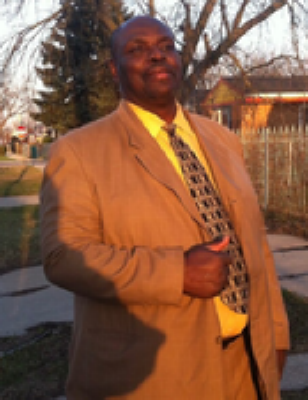